A new book, The Georgetown Waterfront, explores the evolution of that Potomac River neighborhood from a colonial port to an industrial area, to the lively urban community it is today with a grand National Park as its centerpiece.

The authors, Washington historian Kathryn Schneider Smith and city and environmental planner Ann Satterthwaite, developed the book about the changes over two centuries that have left their mark in the unique mixture of old and new buildings and streetscapes of this riverfront neighborhood.

Smith’s section of the book, Port Town to Urban Neighborhood, traces a dramatic shift at the turn of the 20th century when three-masted schooners carrying ice and coal, mules pulling boats on the C & O Canal, and waterwheels powering the paper and flour mills gave way to smokestacks, and steam-driven industry. Enlivened by a rich array of historical photographs and oral history with residents of the time, her work explores the way these changes affected diverse communities of watermen, shopkeepers, craftsmen and other working people who made the area home. Smith’s study was first published by The George Washington University Center for Washington Area Studies in 1989.

Satterthwaite’s contribution, The Century Since, brings the story up to date. Nuisance industries increased in the neighborhood until the 1960s when Washington’s strong historic preservation movement began to turn its attention to the unique mix of old buildings and fascinating streetscapes on the waterfront. Thanks to citizen activism and a local government sensitive to preservation, she writes, the Georgetown waterfront escaped urban renewal and the massive multi-lane freeways that tore through the waterfronts of most major American cities.

Friends of Georgetown Waterfront Park partners with the National Park Service to maintain this urban oasis of lawns and landscaped greenspace, with stairs to the river for watching ducks as well as boat races, and a fountain to cool the feet of all ages. It honors the oldest occupied part of the nation’s capital. Georgetown was chartered as an independent town 1749 and it was not absorbed into the government of the District of Columbia until 1878.

The book was published by Posterity Press.  The book design is by Denise Arnot. 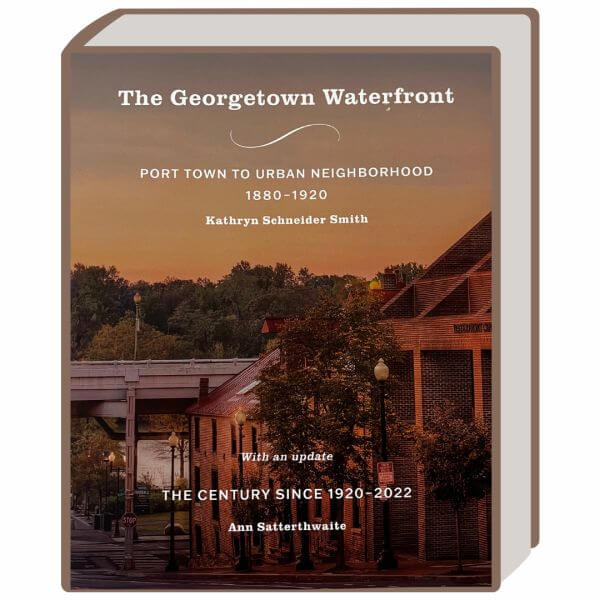